On my farm, there’s a hammock. The hammock hangs outside the back of the house, near our bedroom.  It’s a perfectly peaceful place on the farm,

removed from the cropland and hustle of the working fields.  The hammock’s inviting arc hangs between a plum tree and a persimmon tree.  From a certain distance, it’s easy to imagine it as the Cheshire Cat-like grin of an invisible creature, smiling away at some self-possessed pleasure.

In the Summer you could, if you wanted to, lie in the hammock and reach up to pluck a ripe plum to eat, savoring the sweet, slightly tart juice, not caring if it drips down your chin.  Or, in the Fall after first frost, you could enjoy watching a woodpecker work its beak into a bobbing persimmon.

Truth be told, I’ve never lain in the hammock.  Not once.  It’s a nice idea, and I’m certainly deserving of a good rest and a chance to consider the beauty of this farm I call home from the shade of the fruit trees.  I deserve a chance to read a book, too, or take a nap in the middle of the afternoon when it’s really too hot to work.  I could even see myself on a hot night, when the daytime heat penetrates the shadows and it cools off at night only a little, taking my pillow out to the hammock and enjoying that indescribable sensation of a subtle breeze like cool moonlight across the hair of my forearms, wicking away the heat.

But, like I said, I’ve never done it, not once.  Now, don’t misunderstand me.  Farming has its pleasures, and there are plenty of them.  The well-tended fields of a farm, weeded, cropped in a patchwork of diverse vegetables, brimming over with the sounds of contented humans happily working away, is really a beautiful thing.  It conjures up all that is good, productive and peaceful, the best we humans seem to be able to do for this world and for ourselves.

I imagine, too, that when you read the first sentence of this writing, you were fulfilled in your expectations of what life on a small farm is like.  Hard 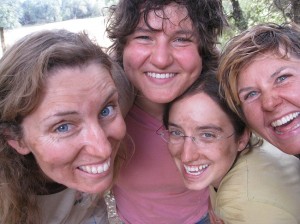 work, but contentment and peacefulness filling in all the moments of the day.  People singing while they work, the cow in its field and the pigs in their wallow enjoying the fond words of the farmer as he or she moves from task to task.  Sitting down to the noon meal surrounded by dirty faces, calloused hands, plenty of laughter and good appetites—Amen!

In a certain way, you’re not mistaken.  The pleasure of farming is real.  Through heat, cold, wet, dry, crop failure, exhaustion and other pestilence, it’s still possible to regularly touch the reasons why one farms.   I’ve never been shy about saying that the real pleasure in farming is all about a kind of love or, better yet, a fidelity to place that I’ve felt through all the years of working here.  I feel a sense of responsibility to the place that is this farm that I’d be quick to say is not unlike that which, as a parent, I feel towards my children.  And, just as the relationship to a child is an uncommon combination of burden and blessing, so too is my relationship to this place.  In this sense, love is not a very descriptive word for privilege and responsibility, but it’ll have to do.

Still, while the pleasures of farming endure through all the unpredictability of a season like the counterpoint bass notes of a beautiful lyric song, the recognition of that pleasure is likely to be as fleeting as a single treble note.

I think of it this way:  I jump off the tractor mid-field because it’s time to turn off irrigation water in another corner of the farm.  On my way, I notice that a drip line is leaking, probably cut by a gopher, and there’s a large pool of water that threatens to drown a bed and will, in any event, encourage another burst of weeds.  Searching my pockets, I don’t have a coupler to repair the leak, so I change direction and head to the farmstand for a coupler.  Searching through the bins, I realize we are out of couplers, so I walk to the pile of discarded drip tape, where I quickly find a coupler that wasn’t removed when the drip tape was pulled up.  With coupler in hand, I head back to the leaky drip line but I then get called over to the washing station to check the quality of some salad turnips we are harvesting for the co-op.  The roots look fine, but the foliage is showing early signs of flea beetle damage.  Deciding that it’s still marketable, the washing and bunching resumes, but there’s another question from an employee that’s cultivating onions in Field 2.  We spend some time talking about what’s reasonable to accomplish efficiently in the face of too little labor and too many weeds, and then my cell phone rings.  The co-op forgot to include parsley on their order, so I take down their order and walk back to the farmstand, where I write in the new order on today’s pick list.  I then review with the person who is going to pick the parsley how many stems are in each bunch and how to pack t 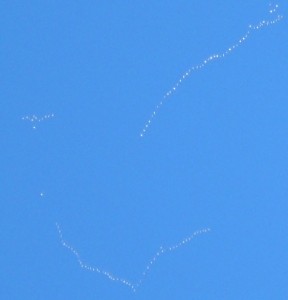 hem for the co-op.  Since I’m near my office, I decide I’d better check email to make sure that there aren’t any important communications from customers placing special orders for bulk items.  There’s an urgent email message from my ex-wife about our daughter, so I call her back to talk with her.  We end up talking for about 15 minutes, at which point I remember the leaking drip tape, so I quickly get off the phone and head back over to the field where the leak is.  It takes but a few seconds to fix the line, and I resume my trip to turn off the irrigation in another corner of the farm.  While I’m walking over, I hear a familiar sound and, looking up, I’m treated to the sight of a huge flight of migrating sandhill cranes.

I trust it’s clear that I’m not saying there’s no pleasure in farming.  There most certainly is, and in 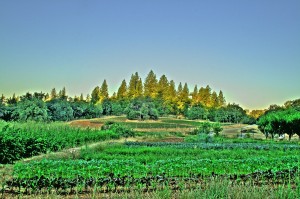 abundance when you look closely enough, but what I’ve described above is about as good as it gets in a day on the farm, repeated more or less to the day for eight months straight.  The particular pleasure is always different, but it can be as short-lived in a day as the moment the light first hits the tops of the trees at sunrise.  And, it’s important to say, you have to look for the pleasure, seize it greedily, and remember it always, or you’ll be buried in no time in fretting and disappointment.

We all know that farming requires physical stamina and some strength, and it certainly requires endurance.  But again, truth be told, it turns out that it requires more mental stamina and endurance than physical strength, and lots more mental resilience and flexibility than is ever commonly appreciated.  I can’t imagine an occupation that requires a person to be more of a Jack or Jill of all trades than farming, including making all the right choices at all the right times.  That’s not a formula for the idyllic vision of farming that we all hold dear.

It’s true that farming is enjoying a renaissance of sorts, with a great deal of enthusiasm being brought to bear on what might fairly be called the finer things in life.  It’s impressive to see how many are called to take up farming on a small scale, and what hopes and aspirations all of us farmers bring to our chosen path.

In fact, many are called, but few are chosen.  It turns out that beginning farming requires a lot of financial resources, along with a lot of courage and fortitude.  Young people can have lots of courage and fortitude, but financial resources tend to be more scarce.  Putting it all together in such a way as to make a farm pay for itself without exhausting the farmer with work and worry is something that is not widely recognized for what it is, even as more young people flock to farm.

After farming for more than ten years on this small piece of heaven on earth, I’m still wondering if I’ll be one of the chosen.  Each year is a new opportunity, and each year presents its own particular challenges.  The line between success and failure is, more often than not, extremely thin, and I often find myself unsure whether a particular year was a success or a failure.  By what criteria, on balance?

In the end, even as I know that this is not enough, I value integrity and the beauty of my fields over financial success.  I value my relationship with my customers more than I value wider recognition of our accomplishments over the past ten years.  I value the interaction I have over the Farmers’ Market table with someone who wants to know how to prepare something we have to sell more than I care about the total number of pounds sold during a season.  And, what’s more, I value the moment I see some inscrutable thing that happens before me as I wander these fields, leaving me to wonder at the depth of pleasure that love can bring.